We are happy to announce that all members of our surgical staff have received the COVID-19 Vaccine.

Our Oxnard & Ventura facelift is an effective means for turning back the clock and giving the face a more youthful, fresh appearance. The procedure should only be performed by a cosmetic surgeon who has an eye for beauty and facial structure, and who focuses on a final result that appears natural and undetectable. Rather than having your friends and family comment that "you've had work done," due to a tight, unnatural appearance, you want to simply reverse the obvious signs of aging, giving your face a natural, rejuvenated appearance. This is where Dr. Morrissette excels.

Your face can suffer the effects of time, sun damage, and the pull of gravity. As the facial tissue becomes less resilient, it tends to sag and droop, giving you a tired, older appearance. A properly performed facelift can give you a completely refreshed appearance, with results that appear natural. Every person is different, and various factors must be evaluated so that the results are attractive, appealing, and give you the fresh, youthful appearance you hoped for.

What Can I Expect During My Facelift Consultation?

At our surgery center, we perform many contemporary facelifts, including, in many cases, shorter incisions. In many cases, the most appealing results occur when volume is restored to the face either during or prior to surgery. A large majority of our patients are candidates for a faster, less-invasive facelift surgery. Others may require a more traditional facelift surgery to achieve the best results possible. Find out what will be best for you.

We will evaluate the following criteria to determine which surgical treatment is right for you:

What are the steps of a facelift procedure?

What are the steps of a facelift procedure?

Your doctor will recommend either general anesthesia or IV sedation for your procedure. You will be completely comfortable and relaxed during your session with no memory of the surgery.

Your surgeon will create small incisions typically hidden within the hairline and within the ears’ folds, where they are inconspicuous.

Your surgeon will address the underlying causes of facial aging during the next step, reshaping your contours for a more youthful, inviting appearance.

Your surgeon will use dissolvable sutures or will place sutures that can be removed within a few days. Skin glue may be used as well to seal your wounds.

Once your facelift is complete, you will appear more refreshed and relaxed. Facelift surgery can often roll back the clock as much as 10-15 years.

How do I choose the right surgeon for a facelift?

Choosing the right surgeon definitely matters. You have various ways you can investigate the record of any doctor. You will be happy to know that Doctor Morrissette is a highly respected professional and a leader in his field. He is often called upon to present information to other medical professionals, both nationally and internationally.

Dr. Morrissette is not only exceptionally talented in facial surgery procedures but has served for two decades as a facial trauma surgeon, gaining knowledge and experience far beyond the ordinary. He is a fellow member of the American College of Surgeons (FACS). This is the largest and most prestigious organization of surgeons globally, leading the way in optimal patient care, surgical research, and education. You can trust such an important surgical treatment as a facelift to Dr. Morrissette, a true professional in the field of facial surgery. 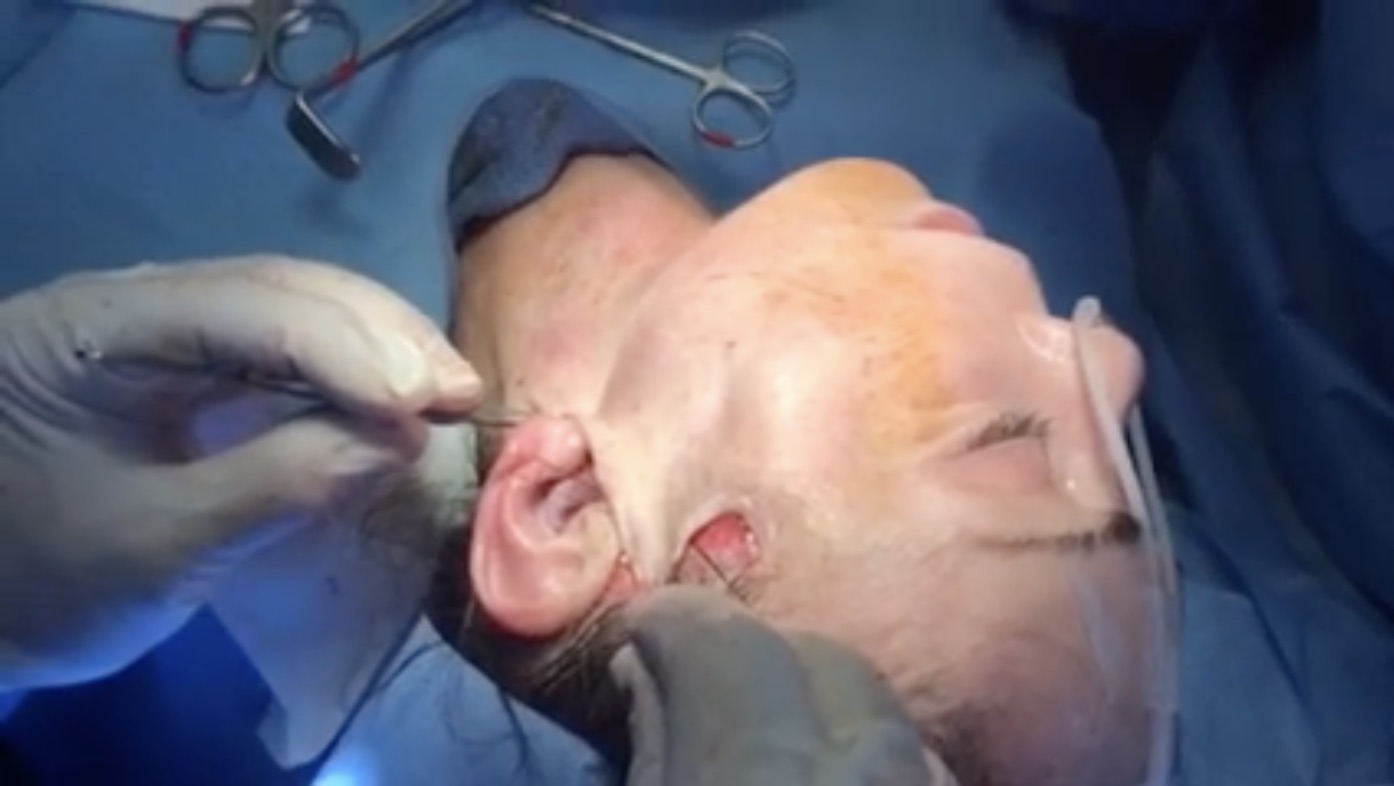 We recommend that you avoid listening to advertising pitches about mini-facelifts, or products that when applied, give facelift-like results. Just like anything else, if it sounds too good to be true, it probably is. You may have seen or heard advertisements about certain new types of facelift procedures. The truth is that these are not actually new procedures, but simply new names for surgeries that have been used by cosmetic surgeons for years.

We also focus upon providing our patients with the safest possible environment. In fact, we are one of the few out-patient surgery centers that has achieved accreditation by meeting the stringent requirements of the Institute for Medical Quality, one of four agencies approved by the California Medical Board. You can trust us to perform any cosmetic surgery, including facelifts, safely and with strict medical protocols.

Are you ready to resolve that tired, weary look, and rejuvenate your face? Contact our office to set an appointment for a consultation. We look forward to meeting you, and getting the process in motion. You are a unique individual, and every detail will be carefully planned out to achieve the most appealing, natural result. We proudly serve the Ventura County area, including the communities of Oxnard, Camarillo, Ojai and Ventura. Contact us now.

At our Ventura facial cosmetic practice, we operate with the philosophy that we must always deliver high-quality, individualized care – with compassion. We believe that communication and collaboration with our patients is the foundation of effective relationships.

When you come to our practice, you can expect professionalism, friendliness, discretion, and comfort. We always communicate honestly about what outcome you can expect.

Facial balance is a critical aspect of attaining a natural-looking outcome. Dr. Morrissette is Board Certified in Oral and Maxillofacial Surgery, and his knowledge and experience bring his abilities in facial surgery to a higher level. If you are tired of looking in the mirror and seeing sagging skin or jowls, it may be time to consider a facelift. Come in for a consultation and meet with us to discuss the best procedures for you. As our interest strictly achieves a natural look rather than a shocking change, we will consider only the most appropriate options for you.

Are you tired of seeing your face looking saggy or worn and have been considering a facelift? Facial rejuvenation is an art – and you need a true artist to create a natural appearance. Dr. Morrissette is a highly-trained facial surgeon, and can answer all of your questions personally. To assist you, we have answered some of the most common questions our patients ask us. Have another question? Call us and schedule a free consultation – we are here to help.

Will a facelift give me a tight, stretched look?

When a facelift is performed too aggressively or by an unskilled surgeon, the results can be shockingly unnatural in appearance. At our clinic, we focus on creating natural-looking results. We want our patients to get compliments for the fresh, rested appearance – not to look like a different person. The skill and experience of your cosmetic surgeon is the most important factor in the final result of a facelift. Dr. Morrissette has an unusual skillset, and is not only a cosmetic surgeon, but is a Board Certified Maxillofacial Surgeon. This knowledge and skill gives him a rare degree of understanding of facial structure and musculature.

How long is the recovery time for a facelift?

Typically, a facelift will require about ten days to two weeks before you are healed enough to return to work. Every patient is different, and younger patients tend to heal more quickly. The healing process continues during the following weeks and months, and then the final result is achieved. The true outcome is usually visible in about three months for most patients.

Will I be under general anesthetic?

Most facelifts are performed with IV Sedation and local anesthesia. Using a lighter anesthetic allows patients to have a faster recovery.

What about the facelifts advertised on TV?

You may have seen ads about a new, less-invasive facelift procedure. The company making these claims has gotten into legal trouble for employees posting fake positive customer reviews, as well as being restricted from advertising that they provided a “revolutionary procedure.” These procedures have been in use by cosmetic surgeons for years, and are simply a mini-face lift, often the right surgery for a younger patient. One of the most well-known advertisers seen on TV has filed for bankruptcy. At our practice, we perform facelift procedures that are known to be safe, effective, and create long-lasting, natural looking results. What is the right procedure for you? Only a personal consultation can answer that question – come and see us by scheduling a free consultation at our Oxnard office. We serve all of Ventura County and beyond.

Facelift surgery is probably the best known cosmetic facial procedure worldwide. It is performed in most countries, and to a certain degree, has a negative stigmata attached to it! Let me try to explain some of the truths and myths about this surgical procedure which has been around for around 100 years.

Today, patients do not want to wait till they look old to have cosmetic surgery. They prefer to stay looking younger all their lives. By opting to have surgery earlier, patients can avoid a big surgery and extended recovery. Be aware of "facelift-like" results with new technology where it sounds to good to be true; it most likely does not produce facelift surgery results. None of these technologies can compare to the longevity and its of modern short incision facelift surgery.

We get inundated with radio and television advertising promoting and describing the many types of facelift surgeries. These include the S-lift, Lifestyle lift, MACS-lift, Quick-lift, Mini-lift, or Mid-face lift. The truth about facelift surgery is that there has not been any new discoveries on how to perform a facelift. All these facelift have the same underlying techniques, but differ in the length of the incision or type of suture technique that is used to create the "lift". In some cases, the names are different but the technique is exactly the same! Don't get confused or rely on the name attached to the surgery to select the procedure that is best for you.

Contemporary facelift surgery has undergone refinement with shorter incisions, fewer drains, dissolvable sutures, and surgeons have a better understanding about the need to volumize the face prior to surgery. In my office, we can treat a high percentage of patients by using a short incision facelift technique, which requires less surgery time, faster recovery and the incision is well hidden in the creases of the face to offer superior results when compared to a traditional facelift. However, there are times when we still perform a more traditional facelift when this technique is required to produce the best results that can be obtained.

Your first step is to come to our office and meet with us about what you hope to achieve. Dr. Morrissette is involved in creating a natural looking result, and never recommends surgery when it isn't warranted, or won't benefit the patient. We proudly serve all of Ventura County, including Oxnard, Camarillo, Ojai and Santa Barbara. Call today to schedule a free consultation with us.

the content/images on this website are not a guarantee of individual results. Individual results may vary. the information provided on this site is for general informational purposes only, and does not replace the need for a formal consultation with a plastic and reconstructive surgeon before undergoing a surgical procedure or skin care treatment.